You’d think by now that the Sharknado movies would have run their course, but here we are on the fourth instalment and the series is still finding ways to amuse its audience; even those who tune in out of morbid curiosity. Are they good movies? Not necessarily. But they are fun, and when a new one airs every year it becomes somewhat of an event; a time where mainstream casuals and ardent genre fans unite as one in front of their television sets across the western world to enjoy some bad weather with a bite. The latest film, Sharknado 4: The 4th Awakens, was watched by 2.77 million people, and it’s another fun entry in a series that refuses to stop being hilarious.

The story takes place five years after the events of the previous film. With new mechanisms to prevent sharknadoes, billionaire Aston Reynolds (Tommy Davidson) decides to open a fancy new hotel called Shark World on the Vegas strip, where sharks are held in tanks as part of their gimmick because, you know, what are the chances of any more sharknadoes happening now? Then a sandstorm happens, the sharks escape and all of a sudden the city falls victim to a new wave of sharknado carnage. But luckily for the citizens and unlucky for the flying sharks, series stalwart Fin Shepard (Ian Ziering), just happens to conveniently be in town to save the day. Or days he?

If you’re already a fan of the Sharknado series – or if you’re just the type of person who enjoys ridiculously self-aware bad movies – then The 4th Awakens will keep you entertained. With films like this you mainly tune in to see how they can exceed themselves in terms of stupidity, and here the bar is raised by the inclusion of some more freak weather picking up cows and fire to include in its deadly arsenal. So if the idea of sharks, cows and fire caught up in a rampaging whirlwind sounds like your idea of entertainment, then I doubt this will disappoint you.  But if you’re on the other side of the fence and you just can’t deal with this type of puerility, then I suggest you avoid Sharknado 4 at all costs. 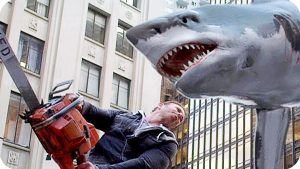 Overall, Sharknado 4 is exactly what you’d expect it to be: dumb, preposterous and unapologetic.  There are more D-list celebrity cameos seeking another 15 minutes of fame before the next outlandish project crops up calling their name and references to a host of other – and much better -movies.  That being said, it ends with the promise of another sequel and the series is still finding ways to outdo itself; so bring it on.

Unfortunately the disc doesn’t come with any special features, but it’s worth picking up even if just to impress dinner guests with.