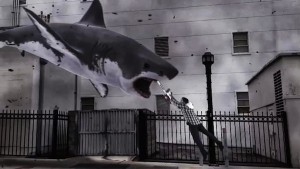 Sharknado 2 is still a few months off yet from release, but it looks like SyFy is confident in the future success of their potential creature feature franchise as they’re now moving forward with a third sequel. The news broke today online that SyFy would indeed be moving forward with another film that will be out in 2015. The first Sharknado was released back in 2013 and it had a one million dollar budget. In the movie a freak hurricane swamps Los Angeles and nature’s deadliest killer rules sea, land, and air as thousands of sharks terrorise the waterlogged populace. In 2014’s Sharknado 2 a freak weather system turns its deadly fury on New York City, unleashing a Sharknado on the population and its most cherished iconic sites. The first two Sharknado films starred Ian Ziering and Tara Reid and were directed by Anthony C. Ferrante and written by Thunder Levin.

More news on Sharknado 3 when it comes in.