Synopsis:
After saving the people of L.A. and New York from a storm of Sharks, Fin Shepard (Ian Ziering) is invited to the White House to receive a prestigious award for his heroics. Conveniently an unexpected Sharknado hits destroying everything and anyone in its path. Narrowly surviving the attack Fin learns there is a whole bunch of Sharknados tearing up the east coast heading for Florida where his family resides. Against the odds it is up to Fin to save his family and put a stop to the most dangerous Sharknado ever. 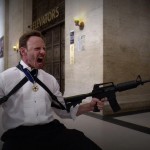 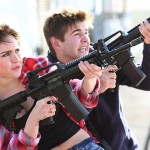 Sharknado is like the popular yeast spread; you either love it or hate it. I personally fall in the former as I am a firm believer that the franchise offers plenty for audiences to chew on. So it should come as no surprise that I really enjoyed Sharknado 3: Oh Hell No! Complete with thousands of CGI sharks, self-aware humour and some truly bizarre moments, this third installment is every bit as amazing as its predecessors.

Yes okay, it is painfully clear that everything from a technical perspective is severely lacking but if audiences are willing to take the film at face value instead of expecting the standard of your average Hollywood blockbuster, there is plenty of fun to be had. As a whole Sharknado 3 captures the randomness and laugh-out-loud moments of the first film proving to be a nice return to form for Anthony C. Ferrante and Thunder Levin.

As director, Anthony C. Ferrante’s work here is standard but this is not bad by any means. After speaking with him in a recent interview we understand the film was shot quickly so, with that in mind, he has done a great job to deliver what he has. Similarly, Thunder Levin’s script is packed with so many surprising and laugh out loud moments that made the film an absolute pleasure to watch as the melodrama has been drastically reduced and the main point of focus is action.

Also, driven by his enthusiasm and obvious screen presence, Ziering does a perfect job leading the film. Supporting him is Tara Reid who also returns to play April. Along with a few upgrades (mainly a retractable hand-saw) and an ear-piercing banshee scream, Reid continues to be an unforgettable addition to the team and very much a staple of the franchise. Yes her performance is clunky in places but it’s pleasing overall for what is required of her. I would have liked to see her do more action scenes but, considering her character’s predicament, I understand why this was not possible. 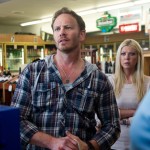 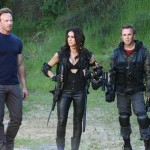 Cassie Scerbo also reprises her role as Nova and it would seem the character has gone through the Sarah Connor school of toughness to become a vicious shark hunter. She is fun and serves as an interesting side-kick for Ziering. In addition, joining the team are Bo Derek and Baywatch legend David Hasselhoff. Derek plays April’s mum in a role which is sadly underused but, on the flipside, the Hoff plays Gil Shepard and his performance is on-point as a steel-jawed retired Nasa employee. Unlike Derek he offers plenty to the plot in the final act and his performance offers an interesting dynamic opposite Ziering.

Sharknado 3: Oh Hell No is far from perfect and it does wear a bit thin between the second and third act but by the time the film reaches its conclusion it employs it a tonne of theatrics that attempts to reach the lengths that only Danny Trejo’s Machete has the balls to do. It doesn’t fully pay off and adds too much crazy for my liking but in all fairness I am fully on board for whatever antics the promised fourth installment will bring.