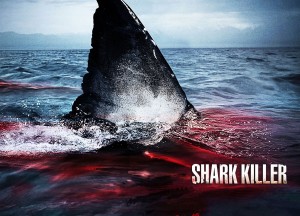 Synopsis:
Chase Hunter is a skilled shark hunter who has been hired by his brother to kill the black-finned shark that swallowed a valuable diamond during a gang transaction. Crossing paths with a crime boss and his own fear of the deep, Ace must work fast to save his brother’s girlfriend Jasmine who has been taken hostage whilst tracking down the razor-toothed monster that will become the greatest challenge of his career.

There’s so many shark-orientated films doing the rounds at the moment. Some are great and some are just plain awful. In the case of Sheldon Wilson’s Shark Killer I am glad to be able to say it was a joy to watch. Starring Derek Theler, Erica Cerra, Paul du Toit and Arnold Vosloo, Shark Killer offers audiences much more than your average creature feature as it is a cleverly disguised action thriller dealing with criminal warfare and stolen goods.

Heading up the film is Derek Theler who is known to most as Danny Wheeler in the comedy series Baby Daddy. In the role of Chase, Theler not only looks like he could be a brother to Chris Pratt but his performance captures Mr Pratt’s persona of being a cheeky scamp flawlessly. He is joined by Erica Cerra who plays Jasmine. Her character is clearly the love interest that will divide the brothers but remains charming herself as her self-confidence glows brightly.

Rounding up the cast are Paul du Toit as Jake and there’s also an appearance from Arnold Vosloo whom audiences may recognise as the titular character in Stephen Sommers’ The Mummy. As an ensemble, the cast are great at what they do and make the film that more enjoyable. But there are more than a few moments where the script does tip over into absurdity and misses the mark completely, especially as the film sets up the fact that our leading man is scared of water but shows no hesitation before jumping in the deep end when the action calls for it.

This said, I was surprised to discover just how much I enjoyed watching this film even if the title is somewhat misleading. Speaking of which, the film does spend ample time hunting for the infamous black-finned shark but this does not take up the bulk of the story. Instead audiences are taken on an adventure which is fun but doesn’t amount to anywhere near as much fun as can be had watching something like Sharknado.

One thing is for certain though, in comparison to the Sharknado franchise Shark Killer boasts superior special effects and benefits from cleaner choreographed fight scenes which are well executed. For these reasons I give Shark Killer three fins up.