Shadows and Teeth Volume 3 is the latest in a horror anthology series published by Darkwater Syndicate. There are some familiar authors included whose books I have covered before, including Guy N. Smith, Adam Millard and Richard Ayre. The ten stories in the collection bring us a variety of scares without an overarching theme throughout the book.

The first story, Cannibal House by Guy N. Smith, starts the collection off strong. It’s a tale of residual evil that remains locked within a house and the new tenant who has to try to deal with it. Tree Huggers was another story I enjoyed. It had an unusual scenario and situation that our teens found themselves in. It’s always nice to read a really fresh take.

Adam Millard’s story, The House Wants What The House Wants, brought a bizarro and completely unexpected plot that was as creepy as it was excellent. One of the stand out stories of the collection was Bernadette. It’s a tale in the form of a letter. It’s set during the time of the Spanish Inquisition and involves possession and a djinn. It was outstanding. Another stand out is Richard Ayre’s story 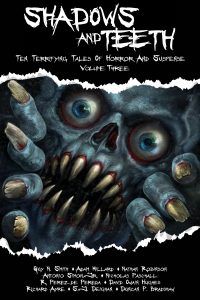 about a man returning to claim his family estate in Scotland. The mystery and bloodshed that comes along with the land builds to a gripping climax. Another favourite was Cruciform, which is the tale of a summoned and trapped demon. As you can imagine, that does not happen without consequences and retribution. As I’m sure you can tell based on the number of favourites I have, this is a great collection.

This is one of the strongest anthologies I’ve covered, full of tight and diverse entries, and with no drop in the quality from one story to the next. The stories cover a range of horror. There is something for all tastes from the more subtle, supernaturally inclined, to cannibalism and monsters. Now I have to catch up on the previous two volumes of Shadows and Teeth and look forward to volume 4.