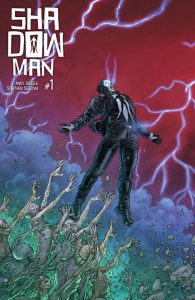 If there was ever an award for the most underrated superhero in history, it would be either Shadowman or Nightcrawler, and the latter one is up for debate. Since the company’s launch in ’92 and relaunch in 2012, Shadowman has been a staple of Valiant Entertainment’s superhero-verse since the beginning despite not having his own series for almost four years. But, thanks to the power of fandom, Valiant has recently announced a relaunch of the seminal superhero/horror series to be released in March 2018.

Featuring the outstanding talent of Andy Diggle (Green Arrow: Year One) and a revolving series of artists, the new Shadowman will start off with a three-issue arc titled ‘Fear of the Dark.’ The arc will act as a reintroduction of Shadowmans alter-ego Jack Boniface into the Valiant universe and continue into an on-going series. For anyone who has been keeping up with Shadowman’s inevitable return, a teaser pic was released last March but it wasn’t until recently did fans finally get the full scoop. Andy Diggle had this to say about the new Shadowman:

“It’s a story about stepping out of the shadows and embracing the light. Trying to move on from your own mistakes and be a better man. Of course, it’s not easy. As Shadowman, Jack will never fully be able to escape his own demons. It’s about learning to live with them. And as he comes to a better understanding of himself and his family’s legacy, he’ll discover whole new worlds and new powers he never even imagined he had.” 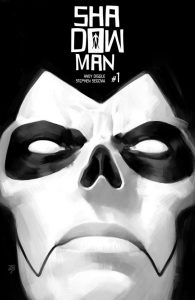 Ccreated in 1992 by Steve Shooter and Steve Engleheart as a flagship title, Shadowman follows the story of New Orleans jazzman Jack Boniface as he discovers he has a connection to another world known as the Deadside. Using his powers of voodoo and enhanced strength, Shadowman spends his crime fighting days making sure the Deadside doesn’t interfere with our world. At the height of its popularity, Shadowman had been handled by creative talent all over the comic market, had a successful game from Acclaim Entertainment (who owned Valiant at the time) and was in talks for a movie. Though not as popular as it was once, Shadowman is still an integral part of the company’s lore and talks have once again resumed about a movie with director Reginald Hudlin tied to the project.

Fans also have a chance to pre-order a three-issue bundle pack that comes with all three comics, creator commentary, process artwork, and a glow-in-the-dark variant cover of the first issue! Now that’s a sweet deal! Look out for the new Shadowman in March 2018!