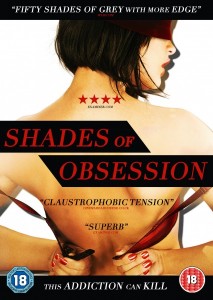 Synopsis:
A family man’s addiction to internet pornography and, in particular, a webcam beauty called Dani Darling, leads him down a dark and dangerous path. As his marriage falls apart and his career is put on the line, Bill must fight to regain a hold on his life before he loses everything.

Shades of Obsession was produced back in 2011 under the name Biology 101, but was later re-branded as Shades of Obsession to appeal to the 50 Shades of Grey audience. That is a cunning plan, if I don’t say so myself. Unfortunately, aside from the similar title, that is as far as the similarities go. Fans of 50 Shades will find little appeal in this tale of obsession and lust that has very mild sexual content. Not that 50 Shades of Grey pushed the boundaries; I found it extremely dull and underwhelming considering its concept. Also, 50 Shades fans can’t deny that their main interest is probably in Christian Grey and there’s no character in this that will rival Christian Grey’s apparent captivating quality. In short, the next 50 Shades this is not.

It may not be able to generate an interest in audiences that are keen to see a woman enticed in to kinky sexual antics with her boss, but Shades of Obsession is far from the disaster that I was expecting it to be. It’s far from perfect and there are moments that are laughably bad, but it never sinks into truly awful territory and is surprisingly watch-able for the most part. The film begins awfully and I would encourage you to sit through the terrible opening credits, just so you can appreciate how shockingly good the film becomes. Put the embarrassing and repetitive sexy images of Dani Darling that parade your screen to the back of your mind, because this really is the worst part of the film. Yes, the poignant piano score is hauntingly bad, but that is here to stay I’m afraid. 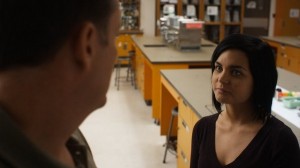 Shades of Obsession tries desperately hard to prove that it’s more than a story about a man who like a bit of porn while his wife is sleeping. It tries to be artistic with its photography, coupling intricate close-ups with that dreadful piano music. There’s also dreamlike sequences where Bill ponders about Dani Darling that do not have their desired effect. It draws our attention to the film’s low-budget, rather than increase the film’s visual appeal. It really takes time for this film to find its feet. The first section of Shades of Obsession is a messy introduction to professor Pollard and his life; the assault of strange visual effects decreases enjoyment levels and makes the film look silly, rather than artistic. As the film goes on these headache-inducing visual decisions are almost abandoned and it’s all the better for it; the simpler, the better.

Pollard is your cliched everyman character who wouldn’t hurt a fly. He’s as quiet, innocent and vanilla as his beige suits would imply and for the entirety of his screen time you’ll be embarrassed to watch him. If one of the film’s aims was to make its audience feel as uncomfortable as possible, then it wholly succeeds. Bill’s constant gormless look and general air of inferiority paints him as a picture of hopelessness. The camera frequently shoots him from high angles and awkward close-ups to encourage us to see him as a loser. In contrast, his wife is a portrait of superiority who is framed to look down on her husband and emphasise his loss of masculinity. Add this to a man who refuses to make love to his wife, has little control over his classroom of students and is accused of not loving his daughter; it’s no wonder he seeks a bit of escape on the internet.

As a film that explores the very real idea of being obsessed with pornography, having unrealistic relationship expectations and, in turn, feeling like you’re worthless, Shades of Obsession’s topic is a relevant one. It takes an unrealistic route as it endeavours to prove its point – that life is damn difficult to master – but, it manages to remain intriguing until the end. This is mainly due to David Welborn’s performance as Bill; he’s suitably deadbeat and carries himself in a constantly defeated fashion. We will never feel ultimately sorry for this average Joe, because we are never given a real reason for his loss of interest in life and that would have increased our empathy. Nonetheless, his character arc is believable and the evolution of his character is a good one to journey with. As a thriller, this is slightly weak and it would benefited from being a little more daring. Bill finds himself in a heap of trouble, but there’s an inability to entice any sense of intensity or suspense that makes Shades of Obsession a disappointing and mediocre thrill-ride.

There is a tone present within Shades of Obsession that is reminiscent of American Beauty; the idea of a middle-aged man with dark fantasies will immediately remind you of the Kevin Bacon-starrer and that is another reason why this film never reaches greatness. Shades of Obsession is not a patch on the Oscar-winner and pales in comparison as it is without the depth or dark humour that American Beauty so wonderfully possesses. This film is a one-trick pony that doesn’t deviate from what you’d expect. Despite its attempt to push boundaries with its attitude towards sex, there is an absence of wit and intelligence that prevents it from having a noteworthy or memorable statement about modern day society’s preoccupation with sex, porn and the internet. 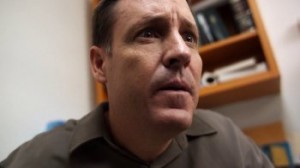 Shades of Obsession is an easy way to pass 75 minutes of your time. Despite a relatively shaky start it eventually comes together and finds its feet as a relevant, if not wholly successful, exploration on families, careers and everything in between.