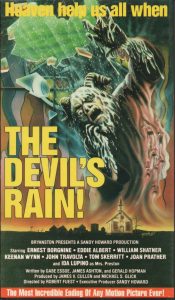 Made by The Abominable Dr. Phibes director Robert Fuest, the film arguably represents the birth of the ‘melt movie’, a subgenre figure headed by 1987’s Street Trash. It stars Ernest Borgnine, on boggle-eyed, scenery-chewing form as 300-year-old Satanic priest Corbis, as well as William Shatner, John Travolta (in his film debut) and Church of Satan High Priest Anton Lavey, who also acted as Fuest’s technical advisor. It concerns a band of Satanists, led by Corbis, who aim to recover an ancient book containing the names of all those who have sold their souls to Satan. Corbis’ powers enable him to melt the flesh of anyone who stands in his way, until nothing but a puddle remains.

The melt FX are gleefully squishy and icky, and are going to look great in 1080p, particularly during the gross-out insanity of the film’s climax, which reaches towering levels of slimy, melty excess. Get a taste of the sticky delights on offer with this vintage trailer.

Severin is yet to announce any disc details or release date, but the rain is sure to return sometime this year.