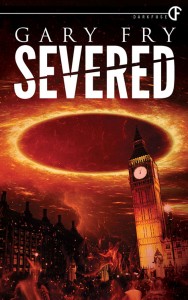 Severed by Gary Fry contains some good ideas but the execution was lacking a little in certain areas. London is in the grip of a chemical weapon attack as a substance dubbed Agent Descartes is released in the capital. The effects of the weapon cause a severance in the body, separating the soul and leaving a body intent on violence, revenge, a zombie whose physical form deteriorates rapidly.

The government abscond to safety, as you’d expect and the military cordon of the city. The race for the cure is on, the spotlight falls on Professor Stephen Hobbs, a man already spiralling downwards, out of control and he is given a proposition to save the city.

Have to say I wasn’t really invested in any of the characters, found myself skipping over some of the story that didn’t hold my attention, the ending was a surprise and maybe the story should have touched on Hobbs character more but I didn’t really care about him enough. There seemed to be similar or more character development around some of the severed victims whose story was really centred on the violence caused by the toxin.