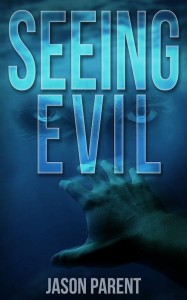 Seeing Evil is the kind of book that’s chock full of intriguing elements, the main one and something I particularly enjoy reading about is kids confronted by evil. A parent to be exact, and one that leaks menace from every pore, then smiles and when needed switches instantly into perfect parent mode.

First chapter sees major crimes detective Samantha Reilly at a murder scene, where young Michael Turcotte has just witnessed the death of his parents. Forward 11 years and Michael is now in school about to get his head dunked into the toilet, digestive biscuit style at the hands of bullies. Another thing I love to read about is bullies, the wait for their comeuppance is just consuming, it’s the perfect way to get invested in a character but Michael has a lot more going for him than that. Human contact can sometimes bring a vision, a nerve shattering glimpse into that person’s future and his first experience sees his friend kill someone at school. Can he stop it?

Tessa Masterson’s father possesses a heart of gold and is obviously a candidate for the father of the year award. The first time we see him he’s punishing Tess by forcibly restraining her in the bath while it fills with scalding water and the next time he’s using her to gain entry to someone’s house, not a nice guy.

‘Her life was like walking on a tightrope through a hurricane.’

Christopher Masterson is one seriously twisted individual, his reign of abuse and destruction is not limited purely to his daughter. He’s a killer and he forces Tessa to take part in his cold blooded murderous games.

All these characters are going to meet, they won’t all survive, they never do of course but it’s gripping as we speed through to a stabbing climax, no not that kind, one involving a sharp implement …. A knife.

Seeing Evil is a very well written thriller, horror comes from abuse and the people that deliver it. The story cleverly taps into two things that you just can’t turn away from, abusive bullies and the desperation of seeing the appropriate just desserts. The characters are absorbing, depth comes from their action and reactions to what they’re confronted with, as it often does with the young. You can’t help but get emotionally invested in these kids. I guess coming off age describes what happens to these kids perfectly and traveling the horrific path with them, you can’t help but hope that everything comes good. There is an air of predictability about the story as we see through Michael’s visions what’s going to happen and the attempts to change the future that follow. The visions themselves are harrowing and add an almost ghostly nightmarish feeling to the proceedings.

‘Then, Michael sees someone else opening the passengers-side door of Sam’s Camry. Though it makes no sense and chills him to his core, he cannot deny what he’s seeing. It’s him! He’s getting into the car.’