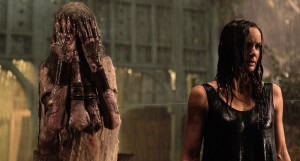 The first clip has come in from 20th Century Fox for their imminent supernatural horror The Other Side of The Door. The film lays focus on parents’ grief (a fertile and complex subject for many a higher-brow horror), depicting a crossing point of the living and the dead, of good and evil.

The film’s horror credentials appear to be in check, with Johannes Roberts (F, Storage 24, the upcoming 47 Meters Down) directing and, as producer, a man never far from a big horror story, Alexandre Aja. The Haute Tension/Hills Have Eyes/Horns director is joined in his producing duties by Monsters: Dark Continent producer Rory Aitkin and his regular collaborator, Ben Pugh.

Leading the cast as the mourning parents are Sarah Wayne Callies (The Walking Dead’s Lori) and the owner of the friendliest face in horror, Jeremy Sisto (May, Wrong Turn, The Thirst).

Here is the official synopsis:
A family lives an idyllic existence abroad until a tragic accident takes the life of their young son. The inconsolable mother learns of an ancient ritual that will bring him back to say a final goodbye. She travels to an ancient temple, where a door serves as a mysterious portal between two worlds. But when she disobeys a sacred warning to never open that door, she upsets the balance between life and death.

The Other Side of The Door will play Glasgow’s Frightfest on 27th February, followed by a UK and US release on March 4th.