Following his mightily unnecessary Cabin Fever remake, director Travis Zariwny (known as Travis Z) got straight to work on a far tastier proposition with his Cabin Fever producers Cassian Elwes and Frankie Lindquist, entitled The Midnight Man. Shot last year in Winnipeg, the film now has its first trailer, which you can see below.

Rather excitingly, the film reunites Elm Street veterans Robert Englund and Lin Shaye. Starring together for the first time since 2005’s hit and miss remake 2001 Maniacs, the pair previously worked together in both the original A Nightmare on Elm Street and again in Wes Craven’s New Nightmare ten years later in 1994.

Supposedly based on an ancient Pagan ritual known as The Midnight Game, the film also stars Gabrielle Haugh (Headlock), Grayson Gabriel (iZombie), Summer Howell (Curse of Chucky) and stuntman Kyle Strauts as the evil creature of the title.

Synopsis:
Alex (Gabrielle Haugh) is a typical teenage girl who lives with her sick grandmother, Anna (Lin Shaye). While searching through the attic, Alex finds directions to a game, which played properly, will awaken “The Midnight Man” (Kyle Strauts), an evil being who will make your worst nightmare come true. At first, Alex and her friends think the game is harmless fun. It is—until The Midnight Man comes to play…for real. When Dr. Goodberry (Robert Englund) comes to the house to check on Anna, he can sense The Midnight Man’s presence, and warns the kids that when The Midnight Man comes to play, he plays to win. 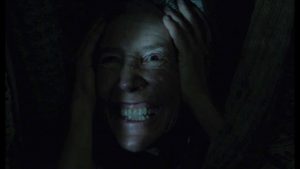 The trailer suggests a film that plays with well-trodden horror tropes and imagery, but one that may be pretty damn scary with it. Eyes should definitely remain peeled for this one.