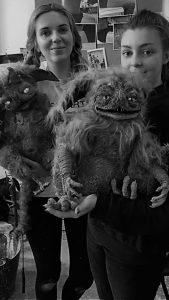 Here’s something we thought you might like to know about. Following a successful Indiegogo campaign, production is underway on “hand crafted punk rock splatter movie” Dead Air, which sees a punk band set upon by a bunch of nasty little critters while flying to their final show. It’s Nightmare at 20,000 Feet, except this time the gremlins are inside the plane. Check out these production shots from the film, showing the “Henson influenced hand and rod puppets” which form the centrepiece to a film in which everything, from the creatures to the plane, is created practically with models, miniatures and puppets.

Geoff Harmer is directing the film, having garnered numerous festival awards and acclaim for his short film Selfie. Starring are Stacy Hart, Kate Marie Davis, Charlie Bond and Johanna Stanton, as well as “a Hollywood Genre Legend!” whose name the filmmakers are keeping secret, at least for the time being. 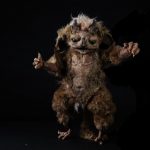 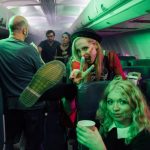 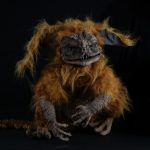 Synopsis:
Set on a plane travelling to a final gig, Dead Air tells the story of Monster Kitten, an all female punk rock band who end up on a flight with some nasty little creatures who like to bite and infect their victims to the point of all hell breaking loose at 30,000 feet.  With the help of their instruments, a tape recorder, a dodgy crew member and a bottle of piss, the girls try to fend off the evil to get to play their final gig.

One to keep an eye out for, no?