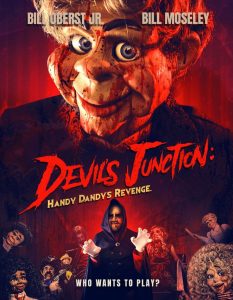 In the film, Steffen (Jake Red) and his friends head to an abandoned Detroit television studio that once housed a beloved 1960s children’s show, the star of which was a puppet named Handy Dandy. Unfortunately, master puppeteer Mister Jolly (Oberst) has an old score to settle with Steffen’s dad (Moseley). And under the ominous glow of the blood moon, his puppets are ready to help him exact his chilling revenge.

Devil’s Junction will screen in Los Angeles on October 18th and 19th before being released on DVD and On Demand on November 5th. Check out the trailer below for some schlocky puppet-filled mayhem.