A Secret Sequel to Stake Land has Wrapped 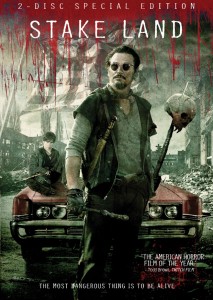 No, you did not miss an announcement for a sequel to 2010’s vampire drama Stake Land, this is brand new information. It has been reported that the sequel – titled The Stakelander – is not only on its way; it has finished filming. How did they manage to keep that one quiet? It’s like 10 Cloverfield Lane all over again.

Stake Land is a fantastic film, but it works well on its own as a standalone film. Do we really need to see a continuation? It’s understandable to have these doubts, but with Nick Damici returning to reprise his role as Mister, as well as Connor Paolo’s Martin, perhaps this could be something great. Don’t let the fact that it has been co-produced by the Syfy channel scare you off, or that it will be airing on the channel as a Syfy original. At least they didn’t call it Stakenado. I think we very much need to see a trailer at this point.

Jim Mickle has not directed The Stakelander, but Nick Damici – who co-wrote Stake Land – has written the script for the sequel, which is now being directed by Dan Berk and Robert Olsen (Body). There is no set date for when the film will air, but we will let you know when it is revealed.