Last year I covered Adrian Roe’s book First Scream to the Last which I greatly enjoyed. It took us through what is possibly horror cinema’s greatest decade, the 1980s. Now Adrian is back with his follow up Second Scream, which covers the 90s. The 90s are an era that saw a downturn in horror popularity, with a reputation for a similar downturn in inventiveness and quality. It’s an era that receives much less critical attention than the 1980s, so I thought this book was a great idea. The author presents to us the films that stood out from the 90s to show that there were some diamonds in the rough in what he calls, the decade that horror forgot.

For the structure of the book, each chapter covers a different year of the decade, and within each year there are a number of films presented. Obviously some years were more fruitful than others. Brief interviews regarding particular films are interspersed and include Wes Craven (The People Under the Stairs) Heather Lagenkamp (New Nightmare), and Nicholas Vince (Nightbreed). The book includes some stills from some of the movies discussed as well as some original artwork. 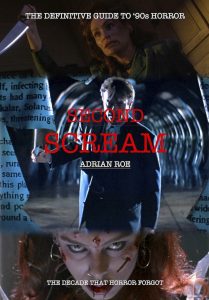 Throughout the book there are some absolute classics and some of my favorite films, such as The Exorcist III, Candyman, and Scream; and also those I just have a huge soft spot for like Freddy’s Dead, Funnyman, Return of the Living Dead 3, and Ticks. In fact, as I read the book I realised there were lots of 90s films that I have a soft spot for. There are plenty of films listed that I would disagree with the author on, such as the Puppet Master and Leprechaun series, but, of course, each to their own!

This is a great reference book for 90s horror. 80s horror is so often grouped together as an entity, but there is not that same grouping for the 90s. Rather it’s more a collection of individual films. This book has provided some great nostalgia, and given me pause for thought about reevaluating the era. Thanks to the book, I have a list of films that I’ve never seen from the period and will have to catch up on. Recommended.