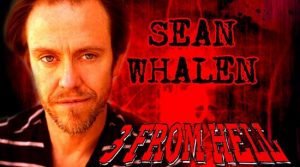 He won our hearts as the crawlspace-dwelling Roach in Wes Craven’s The People Under the Stairs and, despite a long and busy acting career since, Sean Whalen will, for horror fans, always be associated with the character. With more recent genre roles in Hatchet III, The Axe Murders of Villisca and Death House, the cult actor is now the latest name to be added to Rob Zombie’s 3 From Hell.

The sequel to The Devil’s Rejects we never thought we’d see already has an insanely cool supporting cast of genre faves, including Jeff Daniel Phillips, Danny Trejo, Dee Wallace, Austin Stoker and Clint Howard, who plays a clown named Mr. Baggy Britches. It will mark the second time Whalen has worked with Zombie, after appearing in 2009’s Halloween II.

Sid Haig, Bill Moseley and Sheri Moon Zombie lead the film as respectively, Captain Spaulding, Otis and Baby, the psychotic Firefly family members last seen driving into a hail of gunfire to the sounds of Lynyrd Skynyrd’s Freebird. 3 From Hell’s title has led many to assume something of a supernatural bent, and the three sadistic sickos returning from the grave.