A TV adaptation of Clive Barker’s 1987 novel Weaveworld has been in the works at CW for nearly a year now, although since the announcement last March, everything seemed to go a little quiet. Not only have they now found their writer however, but he’s already turned in his completed pilot script!

At the end of last week, writer Josh Stolberg posted a picture of his script’s title page on Twitter, along with the words: “I pressed SEND!!!! Now the wait.” Stolberg penned 2009’s Sorority Row, Piranha 3D and 2013’s Crawlspace, which he also directed. His most recent feature script is that for the latest instalment in the Saw franchise, Saw: Legacy. 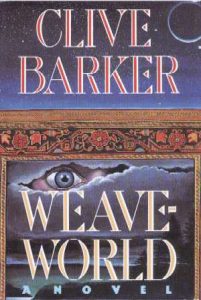 In Barker’s novel, a race of magical beings known as The Seerkind have woven their world and existence into an exquisite carpet which provides a safe haven for them from the human world. A young man named Calhoun Mooney stumbles across the carpet in an old house in Liverpool, his discovery thrusting him into an epic war with various evil beings intent on destroying the Seerkind.

Screen adaptations of Barkers work remain a mixed bunch, with Hellraiser and Candyman no doubt representing the high watermarks, and the likes of Rawhead Rex, Nightbreed, The Midnight Meat Train and Book of Blood varying in quality. Here’s hoping Weaveworld gets the treatment the book deserves.