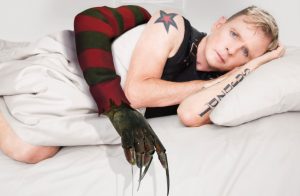 The black sheep of the franchise, A Nightmare on Elm Street 2: Freddy’s Revenge was hated among horror fans for decades, thanks in no small part to its less-than-subtle queer subtext and the audacious choice to cast a male “scream queen.” It’s been having something of a revival recently, due largely to the growing prominence of queer voices in the horror space. But even as the film found the audience it always deserved, its star Mark Patton, who played Jessie Walsh, was nowhere to be seen. That was, until the 2010 documentary Never Sleep Again: The Elm Street Legacy tracked the elusive actor down, triggering a series of events that led Patton to want to share his story with the world.

Directed by Roman Chimienti and Tyler Jensen, Scream, Queen: My Nightmare on Elm Street documents Patton’s return to the spotlight, both at horror conventions and at queer-friendly screenings of Elm Street 2. As he comes to terms with the film that both defined and destroyed his career, the actor also opens up about the homophobia that plagued Hollywood during his heyday, and the AIDs crisis that almost wiped his generation out.

At its core, Scream, Queen is a film about catharsis. Patton’s willingness to lay himself entirely bare is both uplifting and painful to watch; one moment we’re beaming at his unabashed interactions with queer horror fans, and the next we’re close to tears. There’s a deep sense that his potential was wasted, his bright future erased by an era that wasn’t ready for him—and that Patton knows this. And yet as he reenacts Nightmare 2’s infamous dance sequence with a drag queen dressed as Freddy Krueger, it also feels like he’s exactly where he’s meant to be.

This cathartic journey culminates in a face-to-face encounter with the man Patton has blamed for his mistreatment for decades, and it’s here that we see just how heavily the film’s negative legacy has always weighed on him. Despite standing tall throughout the doc, Patton suddenly seems to shrink into himself as he explains his side, his unconscious facial tics saying more than his words ever could. His raw vulnerability is contrasted with the unrepentant ease displayed by the other party, and by the end of the meeting, you’re left wondering if the lesson got through to them at all.

For a documentary about a sequel to a slasher movie, Scream, Queen has an awful lot to say, and Chimienti and Jensen handle the material with a thoughtfulness and love that make it far more than just a curiosity for die-hard fans. A superb score by Alexander Taylor helps to capture the optimism of the overarching message—while leaving the audience ready to start dancing in their favorite 80s shades. 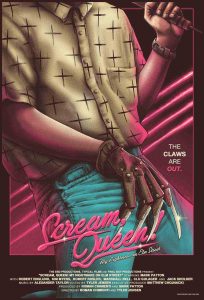 There are only two small issues with this otherwise-perfect documentary, and those are the beginning and the end. The film’s opening, while serving as a neat introduction for viewers coming in entirely blind, does feel a touch like an afterthought, forcing the doc to repeat itself when the ideas the intro teases finally come into play. The ending has the opposite problem; it gives the impression of having been planned before the doc’s pivotal interview took place, leaving Patton to draw positive conclusions from an encounter that was, at best, bittersweet. His claim that he got what he wanted doesn’t ring entirely true, resulting in a happy ending that feels a little forced.

But as queer people, we have precious few happy endings sometimes, so the fact the film has one is hardly a complaint.