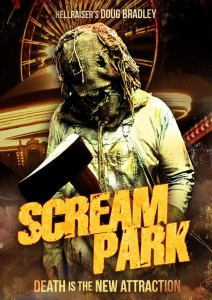 Synopsis:
A group of workers at a fun fair find themselves under attack from two masked intruders the night before the ground is set to close.

If you’re keen to make a slasher film then it would unsurprising for you to take inspiration from the 1980s. Arguably the best decade for films about masked, terrifying killers tormenting and killing teenagers, the 1980s was a wonderful time for slasher fans. Filled to the brim with unforgettable and original killers from Michael Myers to Freddie Krueger and Chucky to Jason Voorhees, it really was a joyous time for those that loved to see a lot of blood and witness a lot of death against a backdrop of ear-piercing screams. Sadly for the, what should be, aptly titled Scream park, it fails to embody any of the elements that made Halloween, Friday the 13th, A Nightmare on Elm Street and co. such brilliant and slasher films that never lose their re-watchability.

Scream Park fails on almost every level as it tries to disguise its laziness behind a mask of homage. Ripping ideas from past films and then presenting them back to an audience poorly, is not the way to express your love for the ‘80s. Smashing together all the best pieces of The Fun House and The Texas Chainsaw Massacre into a muddled and slap-dash narrative does not show your appreciation for Tobe Hooper. Having a self-awareness of slasher tropes and thrusting them in to the face of your audience is not a sure means of earning respect from these fans. Copying the electronic and snythy tones of John Carpenter’s soundtracks is not a sure way to secure your films admittance in to the homage hall of fame. Need I go on? If you’re going to, quite honestly, steal ideas from films to generate interest, then you’re going to have to do it better than this.

There is not an ounce of originality, shock or enjoyment present within Scream Park. What should be a terrifying ride on a roller-coaster of surprises becomes a nauseous ride on the monotonous Waltzer. Round and round Scream Park we go as the film hits every cliché you can imagine. From the poorly written stereotypical characters that include the geek, the goth, the jock, the punk and right up until the final girl/virgin, every single person is as two-dimensional as a piece of A4. The writing reaches a level of poor that very few films reach; the clichés are spelled out to us in case they aren’t clear enough and our final girl is reduced to a character that is devoid of any personality or any real fight. The script is not helped by the actors limp delivery of their lines; it truly looks as though 90% of the cast could not be bothered to be there and hated every moment they had on set. You’ll want to shake the life in to them even before they’ve been hanged, stabbed and sliced to death.

Scream Park severely struggles from poor editing. The scenes are either far too long and will have you looking around wondering what’s going on or will appear to begin in the middle of a take. There is blood for blood’s sake; squeezing someone’s eyes or hitting someone with a crow bar would not result in the levels of blood that Scream Park opts for. I love gore as much as the next horror lover, but it’s got to make a tiny bit of sense. Blood-soaked scenes are great, but there’s a place for them. The entire film feels wholly amateur and on the level of a student film rather than something that has been created by a professional cast and crew. It’s a real shame, because the concept is slightly intriguing and when the truth about the killing is revealed you can tell that there was an intelligent idea at the base, but the entire film is let down by its poor execution. 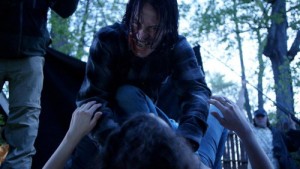 Perhaps due to its low-budget or perhaps due to good old-fashioned lethargy, Scream Park is a chore to get through. What should have been a fun, intelligent poke at slasher films, becomes a truly terrible and predictable slog that has very few redeeming factors. Sorry Scream Park, but you are not the scream that you so try to be. If you’re looking for a recent smart and slick slasher homage then check out The Final Girls.