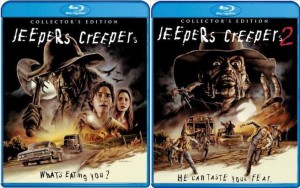 Like him or not, Victor Salva’s Jeepers Creepers films are a couple of great modern monster flicks and Scream Factory seems to agree. With the confirmation of a second sequel in Jeepers Creepers 3, you will soon be able to get your hands on a lovely 2-disc Blu-ray edition of the first two films from 2001 and 2003 respectively.

Writer-director Victor Salva has made various promises regarding the sequel, including, “What will go before cameras as Jeepers Creepers 3 is a new and terrifying chapter from the Jeepers universe. We are bringing back the Creeper’s truck, and will be addressing the big questions about The Creeper: what it is, where it came from and why it does what it does. More exciting though, this will easily be the most frightening rollercoaster ride of a Jeepers film that has been made to date.”

We are very excited to see what new terrors will feature in Jeepers Creepers 3, but for now, be sure to check out the couple of collector’s editions. The special features are yet to be announced, but with an extra disc included, we can assume there’s going to be some hefty bonus material on both of the Blu-rays.

Jeepers Creepers 1 and 2 will be released on a special collector’s edition on 14th June 2016 in the USA and Canada.