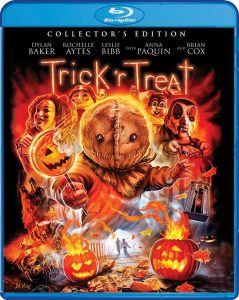 The awesome folks at Scream Factory are releasing the fan favourite Halloween flick Trick ‘r Treat on Blu-ray and, as we live in the UK, we are extremely jealous of our readers in the USA and Canada. The edition will be Region A, so unless you have a multi-region/region-free Blu-ray player, you won’t be able to watch it. Sob.

The collector’s edition will be guaranteed for 3 months after release, so if you buy during this time you’ll be able to nab a limited slipcover. There will also be new extras, interviews and specs on the disc, but those will be confirmed in September.

Trick ‘r Treat is one of our favourite holiday films; it’s gory, fun and creepy, so ticks all the boxes for a thrilling horror film. The film is directed by Michael Dougherty, who also directed the excellent Christmas-flick Krampus, and stars Anna Paquin, Brian Cox and Dylan Baker.

The film follows 5 interwoven stories set on the spooky night of Halloween; all as unique and freaky as the rest. It’s a unique anthology of sorts that doesn’t have a truly weak segment.