The Midnight Man stars Robert Englund and Lin Shaye (starring together for the first time since 2005’s hit and miss remake 2001 Maniacs), and tells of a teenager who finds directions to a game in her grandmother’s attic. When played, the game awakens the titular entity, who makes the players’ worst nightmares flesh.

Travis Zariwny (known as Travis Z) directed the film, which also stars Gabrielle Haugh (Headlock), Grayson Gabriel (iZombie), Summer Howell (Curse of Chucky) and stuntman Kyle Strauts as the Midnight Man himself. The Midnight Man is a loose remake of a 2013 Irish feature from director Rob Kennedy, which will be included on Scream Factory’s Blu. 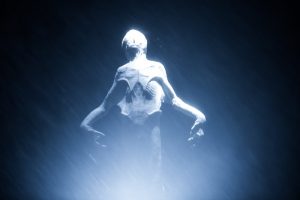 Sci-fi creature feature Devil’s Gate is the feature debut of director Clay Staub, and centres on the disappearance of a local woman and her young son in the titular North Dakota town. An FBI agent partners with the local sheriff and his deputy to track down the missing woman’s husband but the deeper they delve, the more they find that nothing is as it seems.