UNDER – SCOURGE OF THE SEWER: Book Review 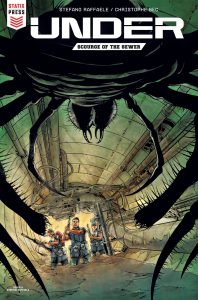 Creature horror has never quite managed to take off in the same way as other horror booms. While fans look fondly on such hits as Sharknado or Jaws (the former perhaps ironically), most animal movies that don’t star sharks or Cujo will usually end up on the midnight slot on the SyFy channel and are horribly littered with poor acting and even worse CGI. Comic books, which tend to follow the successes of the big screen, never even attempted to get into the animal horror, perhaps already knowing that the brief creature booms would never really last. Under: Scourge of the Sewer at least tries not to prove them right. What promised to be a gruesome exploration into the cryptozoology of city sewers soon falls apart into a trope-filled mess filled with poor character planning and a severe talking-head syndrome rarely seen outside of a news debate. But, if you do manage to work past the downfalls, it does surprisingly pay off. If you make it, that is.

Under begins with a tough-talking, gun-toting, black-wearing, quip-spitting, eye-squinting, bad boy cop named Jericho who accidentally gets his partner killed in a hostage situation gone wrong. Knocked down the police ladder faster than you can say “Dirty Harry,” Jericho ends up as a sewer cop, literally. In his city, the sewer system is so large and well-designed that it require its own police force, you know, for chasing hobos and stuff. Still a wrinkly-browed, scowl-face, Jericho is quickly assigned to protect the very hot female scientist Yeatman (and yes, her being a woman and hot are story elements) as she cruises the underground waterways in search of mythical large beasts. Meanwhile, others who live or work in the sewers are soon finding themselves floating face down after a series of animal attacks, their bodies left behind for Jericho and Yeatman to finally prove that there is more down there than just sewer rats. But what are these large creatures roaming the underground and will Jericho and Yeatman make it out alive after more than just animals start hunting them down?

Under feels like the comic version of those SyFy movies mentioned in the first paragraph. It relies too heavily on character tropes i.e. the hot female scientist and the no-nonsense male lead who you know end up sleeping together for no reason at all. As stated, the comic wasn’t even subtle about her being purposely hot and a woman. Unlike a random superhero who is drawn sexy because it’s a standard of the industry, they purposely drew her hot and had the male characters react to her looks and her be happy that she tricked their perception of scientists (which proceeded with a couple of men watching her undress through a camera). If this was a movie, she would’ve been played by a porn star for the pure novelty that the directors got a porn star to act in their terrible movie. The lead, Jericho, fairs no better. He’s basically a third rate Punisher who is haunted by his partners death when needed to add depth to his character and reluctantly does the job his rugged good looks can’t do. He also drinks a whisky bottle every night, you know, as one does. Frankly, the whole character end came off as disingenuous and is aimed at the laziest of imaginations.

Also, there was a ton of exposition that seemed to be tediously tacked on as a way to help understand what is happening in the sewer. While it’s definitely appreciated that there is actual scientific work and that the reader can catch up to where the characters are, there’s just so damn much of it. The information seemed to be poorly spaced out and the word balloons ended up crowding the panels, making for a visual mess. Luckily, the writer gets most of the cluttered panels out of the way early and the pages flow a little smoother halfway through the comic. It’s actually kind of worth it to read to the end. 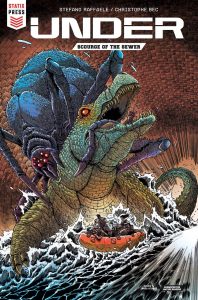 On the plus side, once the exposition is done, there is a good amount of solid fights and some pretty gruesome kills and corpses. The action sequences are well scripted and the writer knows the importance of building a mystery around the monsters before actually revealing them. He also adds in some disturbing scenes that work really well with the bizarre and relatively unexplored sewer system. Everything around the characters isn’t actually that bad, as if the writer had an overall idea but couldn’t quite figure out the details. If this was a movie, it would be a B Horror that at least managed to make it to DVD. Also, the cover art is a huge visual draw with its finely detailed alligator and spider creatures and wonderful, rainbow hue colour work. The interior art, while not winning any awards, is well laid out and makes use of the sewer to create a cramped atmosphere and tense action. The reveal scenes were also nicely done and ranged from monster attacks to corpse findings to the thing that lurks in the dark!

If you’re looking for a title that requires lot of suspension of disbelief and some sweet alligator shooting, look no further than Under: The Scourge of the Sewer. Out December 13th through Titan Comics!