SCARS OF THE BROKEN: Book Review

This is the third book in an impressive series. The first book, The Summer I Died, was one of the most shocking books I’d read in some time. The second, Born to Bleed, continued our hero Roger’s story and expanded the scope. I’d recommend reading the rest of the series, but if you haven’t, all you really need to know is that Roger went from tortured prisoner to serial killer slaughterer.

Roger has help this time from Katrin and Craig, two other employees of the mysterious Fountain who are both lethal and a bit psychotic. Katrin is psychic as well as a fighter, and Craig can feel no pain. Roger also has a power which is why he was chosen by Fountain for the hunt. His power is luck. He’s a survivor. Craig was probably my favourite character –  a British loudmouth who’s always looking for a fight. Craig’s power (or illness might be a better description) is put to great use, as he really takes some punishment.

With our heroes chasing a sick torturer serial killer, you will quickly discover that the book is extremely brutal. The killer is one demented man. The scenes of torture are incredibly graphic with removal of limbs, eyes, and intestines – that kind of thing. There are beheadings. It’s not for the squeamish.

Tooth, Roger’s murdered best friend from the first book, provides plenty of black humor. Roger hears Tooth’s voice in his head. He is very dark and funny, and always inappropriate. Unfortunately, Roger is also haunted on occasion by Skinny Man, the killer from the first book who took his sister. Skinny Man’s voice is trying to convince Roger to escalate the violence he’s inflicting on bad guys or to enjoy the pain inflicted on others. The events from the first book that really made Roger are still with him. Roger is very dry and never without a timely quip. 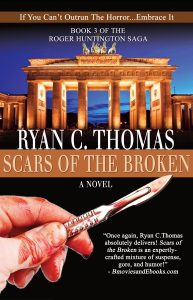 Along with the tangled web of events in Berlin, they also mix it up with gangs, corrupt police, and sex traffickers. The wider context of the story involves organisations surrounding both the serial killer and Fountain. I enjoyed the Berlin setting. It was a good change, and you did get enough references to have a sense of place.  There wasn’t too much development of actual German characters and culture though. I would have liked to have seen that taken further.

In some ways this book is more of a procedural investigation book as they hunt down leads to find the killer. This moves away from the more supernatural elements of the second book. This story seems more grounded in reality. The author is continually developing Roger and the stories that he’s in, which is to be praised. It’s so much better  than just repeating the same story lines in a new setting. This is a worthy continuation of a series I would recommend reading, and I’m looking forward to the next instalment.