Shudder has shared an official trailer for Scare Me, a new horror-comedy from Josh Ruben, making his feature film directorial debut. 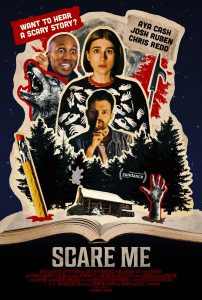 The film follows Fred, a frustrated copywriter, who checks into a winter cabin to start his first novel. While jogging in the nearby woods, he meets Fanny, a smug, successful young horror author who fuels his insecurities.

During a power outage, Fanny challenges Fred to tell her a scary story. As a storm sets in, they pass the time by spinning spooky tales fuelled by the tensions between them, leading Fred to face his ultimate fear: that Fanny is a better storyteller than he is. And when their pizza delivery guy turns out to be a horror fan, the stakes are raised even further.

In addition to writing and directing the film, Ruben stars as Fred. Aya Cash (The Boys) plays Fanny, with Saturday Night Live’s Chris Redd playing Carlo, who delivers both pizza and levity to the proceedings.

Scare Me will hit Shudder on October 1st. Check out the new trailer below.