The first official teaser image has been released for Corin Hardy’s The Nun, the latest entry in the ever-growing Conjuring franchise-universe. 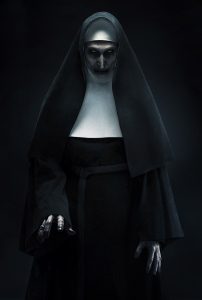 The Nun will follow a priest investigating the suicide of a young nun, immersing him in a terror he could never have imagined. Hopefully the film will follow in the footsteps of the most recent instalment, Annabelle: Creation, by impressing and scaring audiences in equal measure.

Corin Hardy, director of the impressive fairytale-horror The Hallow, is at the helm and directs the film that will star Taissa Farmiga, Demian Bichir, Charlotte Hope, Ingrid Bisu, Jonas Bloquet and Bonnie Aarons.

The Nun script has been written by The Conjuring/The Conjuring 2 director James Wan and Annabelle/Annabelle: Creation scribe Gary Dauberman.

The Nun will be released to haunt your nightmares on 7th September 2018.