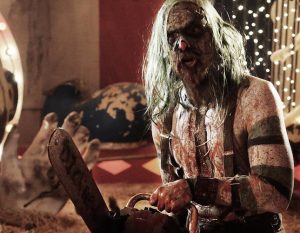 Dust off your cowboy boots. Sean Patrick Flanery (Saw 3D, The Devil’s Carnival, The Boondock Saints) and Lew Temple (The Walking Dead, The Devil’s Rejects, 31) have signed on to star in the upcoming “horror-western epic” Spirit Reckoning.

In the film, Flannery will play psychotic gunfighter Lawson Lovette, who uses his skills with a revolver to help a fellow named The Skull Cowboy get his revenge. Lovette has an intense rivalry with Ottis Clement (Temple), who is just as crazy as he is.

“Spirit Reckoning is a fun filled action-horror-western that has never been done like this before and we’re billing it as John Woo meets Sergio Leone meets the horror genre,” says writer-director Jimmy Lee Combs (Terror Tales). “The Lawson Lovette character is a real ball of fire with some great wise cracks along the way and for me was the most fun to write of all the characters. Being huge fans of The Boondock Saints films and Sean Patrick Flanery’s work, we knew he would be the perfect choice to match the wit, charm and crazy side of Lawson.”

Spirit Reckoning will begin filming in Colorado and California later this year, with a 2020 release date planned.