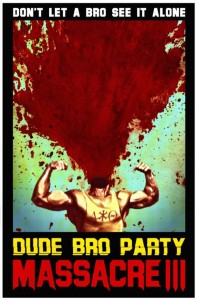 Dudes, you’ve never seen a trailer quite like this one before, and we think you’re going to love the over-the-top bloodshed that is Dude Bro Party Massacre III.

The trailer is a little quick-paced, but there’s famous faces galore, blood and visceral drenching everything and some hysterical annihilation of the most satisfying kind; watching loads of “dudes” and bros” being butchered. Fist bump me bro.

Synopsis:
After two mass murders on one of the most notorious fraternity rows, outcast Brent has to infiltrate the ranks of a popular fraternity in order to investigate his twin brother’s murder. As he delves deeper in the world of dudes, he must find out how to stop the infamous and deadly Motherface.