The frankly insane 1971 film depicts hellraising youth motorcycle gang The Living Dead, whose leader Tom discovers that his mother is a devil-worshipper. Using her talents, he makes a pact with The Horned One to achieve immortality. Sharing the secret with his fellow bikers, Tom encourages the gang to commit suicide, only to rise again as badass undead thugs. 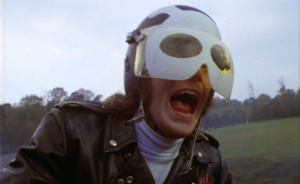 Ahead of the September release, Psychomania screened last week at the Starburst International Film Festival, and will receive a launch screening at BFI Southbank on September 14th, with a Q&A with actor Nicky Henson (who plays Tom), hosted by Flipside curators Vic Pratt and William Fowler.

BFI’s blu-ray will hit the streets on September 26th. Read on for the full details and list of extras. 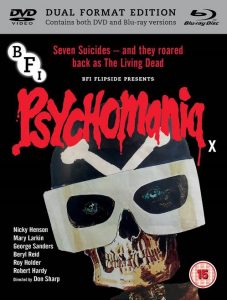