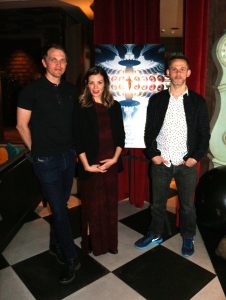 Today (March 17) sees the release of Dagen Merrill’s psychological thriller, Atomica. Starring Dominic Monaghan (Pet, “Lost”), Sarah Habel (Hostel: Part II) and Tom Sizemore (Born on the 4th of July, Natural Born Killers), the film tells a not-so-distant-future tale of a young safety inspector, Abby Dixon (Habel), who is flown out to attempt to bring a remote nuclear power plant back online. Once inside the facility, mysterious clues and strange behaviours cause Abby to have doubts about the sanity, and perhaps identities, of the two employees onsite.

To celebrate the impending release, SCREAM caught up with Sarah Habel to talk all about her role in Atomica and how the premise, her supporting cast members and such a shuddersome and remote setting found her journeying deep into her own psyche…

SCREAM: The project dates back as far as 2013 when it went by the name of Deep Burial. Were you involved in the project since way back when? If so, what did such a lengthy process entail?

Sarah Habel: Yeah. The reason it took so long was basically the post-production involved to get everything squared away with special effects and all that business so we did the movie all the way back then and it’s finally come to fruition. I’m so excited and it was great to get to finally see the finished film.

SCREAM: What surprised you the most when you got to see the end product?

Sarah: I guess just the location through the lens of the camera. Being there was unsettling (laughs) because it was a very creepy place to be. But just to know what it is and then to see it and interpret it through that direction was really moving. It just gave me the creeps all over again.

The location itself was an abandoned nuclear missile silo which was like 3 storeys underground. It was 40 degrees ALL the time and bats were flying around and there were literally miles and miles of different pathways and cavernous rooms. It was crazy. It was like the fourth character in the film.

SCREAM: Did all these bat-ridden locations alter how you prepped for the film as I’m guessing those uninvited guests, as well as just the location itself, must have been pretty off-putting?

Sarah: I did as much prep as I could but it was a pretty quick process. I was cast and then off we went to Washington State. A lot of it was being immersed in that environment and just sort of learning as I went along.

SCREAM: You can’t not have been excited to star alongside the likes of Dominic Monaghan. The whole dynamic of the film revolves around whether or not his character can be trusted. Did you brainstorm with him in terms of how to keep audiences guessing or did you both rely more on playing off of each other in the moment to create that always looming cloud of uncertainty? 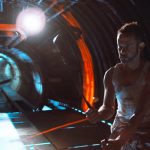 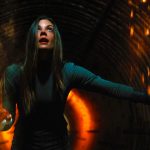 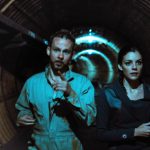 Sarah: I think his mission was to keep me on my heels so we didn’t really collaborate (laughs). And he totally achieved that mission. My character was meant to be restrained and really trying with all her might to do her job, even though she’s in way over her head. Dominic had the equal opposite which was to knock me off my guard. I found it to be a giant challenge to stay contained in his presence because he’s so engaging and so charming and, weirdly, I just so wanted to be on his team.

SCREAM: Some of the dialogue sees Dominic’s character go off at tangents in really talky moments and he starts waffling about things like Britpop bands such as Oasis and Shed 7. Was that all scripted of did Dominic throw things like that in to mix things up or fox you?

Sarah: It was actually all very scripted. He just played it in such a way that it felt so natural I guess.

SCREAM: Was Dagen Merrill open to input and/or improv from the cast at all?

Sarah: My character’s mission in the film is to stay on task so there wasn’t a whole lot of wriggle room with her. It would have almost be counterproductive for me to improvise I think, just because I had to stay on my goal; and I think probably more so for Dominic. But Dagen was really collaborative and it was definitely a work in progress as we went along. I never felt like I couldn’t go off script but the lines were such a strong guide to keep me on my purpose.

SCREAM: Did you put in much research in terms of the psychological side of the story, particularly the way your character interacts with Dominic’s character who we aren’t sure has a very firm grip on reality?

Sarah: I didn’t have much time to do much research but the setting itself and the situation – me being a less seasoned actor than Dominic – knocked me, as an actor, off my game a little bit. I think it was one of those parallel experiences that really fed into the relationship. But it was really important for me to stay in it with Dominic and let his energy guide how my character reacted to him.

SCREAM: Aside from Atomica, what have you got coming up that you’re able to share with us?

Sarah: I don’t know if you have all our networks over in the UK but I’m on a show now called Riverdale on The CW. It’s like an Archie comic meets ‘Twin Peaks’ type thing. So, anyone who’s interested in what I’m doing should check that out.

Atomica releases in theatres this March 17 followed by a VOD and Digital HD release on March 21. We’d like to thank Sarah for talking to SCREAM and we urge you to check the film out. In the meanwhile, dive into the latest trailer for the film below…