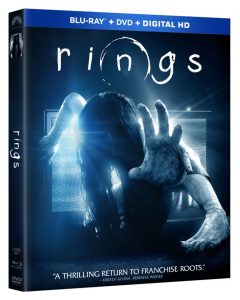 If you’ve been dying to add Rings to your DVD or Blu-ray collection then you’ll be glad to know that the film will be released on 2nd May. If you’re not keen on physical copies of films, then you can catch the film two weeks earlier on Digital HD on 21st April

Synopsis:
When a radical college professor (Johnny Galecki) finds the mysterious video rumoured to kill viewers seven days after watching, he enlists his students in a dangerous experiment to uncover the secrets behind the Samara legend. When the deadly video goes viral, they must figure out a way to break the curse and defeat Samara before her evil is unleashed upon the world. But, how do you stop her when she’s everywhere?

Rings was certainly not a good film and its disastrous box office figures contributed to the cancellation of the Friday the 13th film we were so keen to see made. However, it’s far from as terrible as you’d except and is a huge improvement on The Ring 2. It surprisingly owes a lot to the Japanese Sadako vs Kayako; minus the entirely tongue-in-cheek vibe and general hilarity that is present as the Ring and Grudge face-off. It’s definitely worth watching and die hard fans of the Samara/Sadako franchises will undoubtedly find a lot to enjoy.

The special features on the film’s home release include deleted/extended scenes, behind-the-scenes footage and an alternate ending, and you’ll be able to get your claws into them from 2nd May, courtesy of Paramount.