Salem Bids Farewell With its Third and Final Season 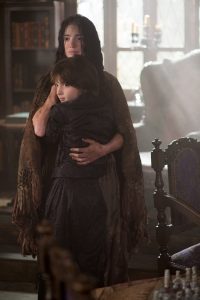 Salem is calling it a night as the show draws to a complete close after its third season. It is sad, but unsurprising news, and even the show’s creator Brannon Braga was expecting the third season to be Salem’s last. He said: “We knew this would be the third and final season and were able to craft an exciting climax to Mary’s transformational saga”.

The good news is that we will be left with an exciting and conclusive finale, because there’s nothing worse than when a show concludes without fully drawing to a close, leaving unanswered questions and gaps in the story. Hopefully Salem will tie a neat bow around its supernatural story to ensure we’re left satisfied after the show’s 3 year run.

When speaking about Salem’s end, the president of WGN America and Tribune Studios, Matt Cherniss, said “We thank Brannon, Adam, our talented cast and our partners at Fox 21, for entrusting us with their unique and remarkable vision for the world of “Salem”. We also thank the fans for their loyal support of the show.”

Salem’s final episode will air in January 2017, so tune in then to say your goodbyes.