Ellie is tired of life. Despite outward appearances, being married to a pastor and heavily involved in the church with her husband, she’s been living a lie. The secret she’s been carrying is her sexuality – she thinks about being with a woman. The only people she has come out to are online in a suicide forum, as she could never contemplate coming out in her conservative community. It’s on that suicide social network that she finds Lori. She wants to be Ellie’s suicide buddy and let her indulge her secret desires, before they end their lives together. They arrange to meet at a hotel for their final night on earth to fulfill all their desires and then end their lives.

Ellie examines her life and the consequences of coming out instead of killing herself. There is a good deal of introspection both about sexuality and also about life and death. Lori’s backstory is altogether different and more disturbing. There is much she has not told her lover to be. Ellie comes across as naive and inexperienced. Lori is the more dominant of the two and is bringing Ellie into the dangers ahead beyond the prospect of suicide. 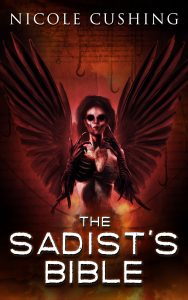 What makes this story controversial is the presentation of religion and God. I’m going to avoid spoilers on this, as the religious aspects are too integral to the plot of the story. Suffice it to say that religious folks are not going to like this book one bit and I doubt they would get through it. And that’s an understatement. Degeneracy, both sexual and of the human form are key themes.  One of the most interesting examples of deformity in the book is Rene, a misshapen but charismatic character of few words, who has a critical role to play in Ellie’s life.

Ellie and Lori are lesbians, but this is not written by a man to titillate male readers. To Lori, her relationship is as much about love and acceptance as is it sexual intimacy. The dark sexual tones, sadistic eroticism, and the intertwined bond between pleasure and pain certainly brought to mind Clive Barker. The novella is fast paced, and there is not a dull moment. The book also bounds in to more cosmic horror for what is quite the epic finale.