U.S. production company Gundo Entertainment is readying a remake of the horror-classic Blood Feast, originally considered the first ever splatter film which established the gore genre through its explicit on-screen murder scenes. Whilst based on the source material, the revamp, to be directed by Marcel Walz (Seed 2), will boast cutting edge special effects coordinated by makeup effects wizard Ryan Nicholson (Final Destination, Riddick).

Commenting on the film Walz stated, “This project makes one of my longest dreams come true. To realize the remake of the cult movie Blood Feast feels like winning the lottery to me. The fact that the production studio gives me all their trust is an honor. I have very much respect for the realization of this movie and will try everything to make the remake live up to people ́s expectations – to make it as bloody and brutal as they hope for.”

Set to star Robert Rusler (A Nightmare on Elm Street Part 2: Freddy’s Revenge), Caroline Williams (Rob Zombie’s Halloween II) and Sadie Katz (Wrong Turn 6: Last Resort) principle photography is scheduled for September 1st and in order to produce a bigger, bolder and bloodier movie, a crowdfunding campaign is currently running on indiegogo. This crowdfunding event will give every fan of the original and the gore genre a chance to be a part of the action and help write a new chapter in film history. 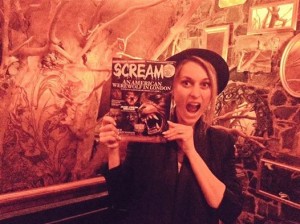 To celebrate the campaign and upcoming shoot we caught up with Sadie Katz to find out a bit more about the film and her character Ishtar, the goddess of war, love and sex…

SCREAM: How much of Blood Feast, the ORIGINAL splatter movie, were you aware of before you came on board?

I think Blood Feast is one of the films that, like Urban Legend, everyone has heard of. You’re like, “I’ve seen it right…right?” But, you know it’s important to the genre because it started it all but you’re not sure if you’ve actually seen it. You don’t want to get caught with you pants down in front of true horror fans so you’re like “Yeah, Blood Feast! Yeah, of course I’ve seen it. Shit. I gotta go watch it.” I mean, Herschell Gordon Lewis, come on!

How did you end up auditioning for Blood Feast?

I really lucked out because Marcel had seen me in Wrong Turn 6 and liked what I did and made contact with me through social media, which is always kind of awesome and surreal. I was on another project at the time and mentioned it to the director and he was like “Do you think this is legit?” and he just about wet himself going on and on about what a big deal it was.

I think it wasn’t until the actual auditions that you really got into the camp of Blood Feast. What was it about the casting process that got you really pumped about the film?

This is a really difficult question to answer because I don’t think a lot people realise how strange the casting world is when you are casting across countries – it’s sort of a leap of faith and goes on past work – and word of mouth.  There’s also a language barrier and a little mystery because they don’t want you to spill the beans to what they’re doing with their project. I really experienced a lot of that with Wrong Turn where I knew so much and so little. I gave a lot of clumsy answers before the project and even after shooting because I wasn’t sure what I could say and couldn’t, which is kind of fun for me. I mean, with these projects what gets me pumped really is the mystery of what the project is going to be. I’ve been doing a lot of research on the original Blood Feast and Herschell had no idea how successful the film was going to be. However, the cast loved making the film and the flaws and ridiculousness of what they were setting out to do added to its success. Maybe my lack of knowledge of what to expect is what’s getting me pumped about the process because it’s mirroring in some ways what the original was setting out to do – which true fans of the original will understand. Herschell had a quirky personality, he had a sense of humour, he set out to make a blood bath of a film. It was pretty digusting and some of the actors had their lines written on their hands. I don’t know, I think that’s funny. I’m wicked like that. Marcel is a character and from what I’ve seen he is going to go that way, fuck if I know. I’m kind of stoked to see.

Can you tell me a bit about the role of Ishtar, who your friends say suits you down to the ground as she is the goddess of war, love and sex? What enticed you to this role?

It’s hard to answer this question without sounding like a vain asshole but, here goes: The opposite of love is war, right?  I guess I’m complicated.  I like to shake things up.  I tend to play characters with an edge.  I love to play women who instigate men to do bad things I suppose.  A wise actress once said, “I’d rather play the bitch than the victim.”

Playing a supernatural character like Ishtar must be a challenge. How will you approach getting into Ishtar’s skin?

It’s definitely a challenge and I think you have to find what makes it real and authentic and not get too intimidated by that. It’s going to be interesting to play that. I’ve played demons before and that’s where acting and playing pretend come in. I mean, how do you play a cannibal if you’ve never eaten a person? Ishtar’s just really a jealous woman when you come down to it. Aren’t most gods/goddesses always pissed off and angry?

You must be really excited to work with Robert Rusler and Caroline Williams.

Yeah I am. I have spoken with Caroline on Facebook and Twitter. I don’t know if I’m really communicating with Robert or not because he doesn’t really use instant messages and stuff. Caroline and I have a mutual friend so we connected with each other on Facebook and I feel like she is going to be super rad. She’s a legend and so is Robert so I think it’s going to be really cool.

You must be excited to get to seduce Robert Rusler to go off and find body parts for you.

Oh yeah! There’s a certain head-trip of working with someone who’s a bigger, badder-ass star than you and I’ve just got to go on and seduce him and control him so that’s going to be so much fun.

And what do you think Marcel will bring to the table that will make this a special project for everyone involved and ultimately for audiences?

Well, for him I think it’s been his passion project for years. Just the idea that he has been involved with the original creator shows the sheer passion he has and it’s not just somebody who’s doing it to make a buck off of it. So that’s exciting when you are working with somebody like that. He’s young and he’s got a lot of energy and his own style, if you’ve seen any of his stuff. He has a kind of campy and tongue in cheek approach and I think if he can bring that to the today then the film is going to raise awareness in people.

So to wrap up are you able to share anything you have coming up shortly?

We’d like to thank Sadie for chatting to us and urge you to check out the indiegogo campaign as this looks like it’s going to be one bloody great production and there are a bunch of great perks to boot!