Netflix’s Chilling Adventures of Sabrina might have come to an end, but Sabrina Spellman’s story is not over yet. Creator Roberto Aguirre-Sacasa is picking up where the show left off with a new comic series called The Occult World of Sabrina. 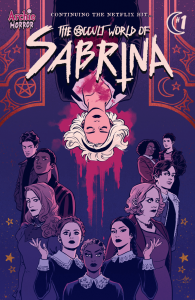 “When I got word we weren’t doing any additional parts or seasons we had already suspected four would be the last part, so we really wanted to go out with a bang,” Aguirre-Sacasa told Deadline. “We had Sabrina sacrifice herself to save her family, her friends, her town. On the other hand, we didn’t know definitely so we did end on a cliffhanger. I finished editing the finale at the beginning of the pandemic and pitched a possible part five to Netflix which would’ve produced Archie, Betty, Veronica, Jughead, and all the Riverdale characters as witches and there would’ve been a witch war between the witches in Greendale versus all of these witches and warlocks in Riverdale. Netflix was excited about that idea but due to the pandemic, it didn’t feel possible.”

Teasing the upcoming comics, Aguirre-Sacasa notes that “When we start that series, it’s exactly as it ended in the Netflix series with Sabrina and Nick in the sweet hereafter and her family and friends in Greendale are trying to live in a world without Sabrina. We’ll see how her loved ones have been doing since Sabrina sacrificed herself. The first thing Zelda does is recruit a team of their family and friends to go into the underworld to bring Sabrina back to life.”

The Occult World of Sabrina comics will be separate from the Chilling Adventures of Sabrina comic series that the Netflix show was based on. That series is also returning this October.