Saban Films and DIRECTV have acquired the distribution rights to Small Town Crime, a thriller that follows a man intent on finding the killer of a young woman. The film just premiered at the SXSW festival and has an impressive cast that includes Octavia Spencer and Anthony Anderson. 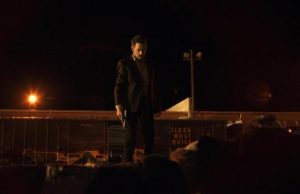 Small Town Crime follows ex-cop Mike Kendall (John Hawkes) who discovers the body of a young woman and, in an act of self-redemption, becomes hellbent on finding the killer. While his un-couth and quirky detective style helps break open the case, his dogged determination unwittingly puts his sister (Octavia Spencer) and best friend (Anthony Anderson) in danger.

The film has received some outstandingly positive reviews from SXSW and beyond, so we look forward to catching the film soon. Hopefully a trailer release is on the horizon now that a North American rights deal has been secured.

Small Town Crime comes from directors Eshom Nelms and Ian Nelms; two brothers that have additionally directed the comedy Waffle Street and the drama Lost on Purpose together. Keep your eyes peeled for a release date soon!