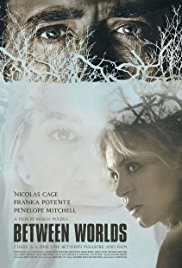 Nicolas Cage has been busy even for him with genre fare of late. One upcoming film starring the yelling, wide-eyed, Oscar winning nutbag is supernatural thriller Between Worlds, which has just been picked up for US distribution by Saban Films.

Saban is reportedly planning a day-and-date big screen and VOD release for the film, which was written, produced and directed by Maria Pulera, her sophomore film following crime thriller Falsely Accused.

Synopsis:
“At a way station on a lonely highway, a man obsessed with the death of his wife and daughter meets Julie, a spiritually gifted woman who enlists him in a desperate attempt to recover the lost soul of her comatose daughter, Billie. Billie suddenly awakens in Joe’s presence, but she’s not herself — her body has been taken over by another soul: Joe’s dead wife, who has returned to settle her unfinished business with the living.“