RUN FOR YOUR LIFE WITH THE HUNT TRAILER

If you saw Alexandre Aja’s creature-feature Crawl in theatres, you might have spotted a trailer for another new Blumhouse horror film: The Hunt. But don’t worry if you were in line for popcorn—the trailer is now online and you can check it out below: 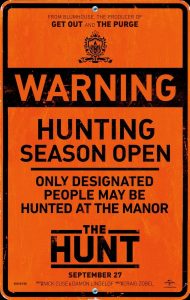 In The Hunt, 12 strangers wake up in a clearing with no idea where they are or how they got there. Little do they know, a group of elites are planning to hunt them for sport. But the predators become prey when one of the hunted (Glow’s Betty Gilpin) turns the tables and starts picking them off one by one.

Two-time Oscar® Academy Award winner Hilary Swank also stars in the film, which is directed by Craig Zobel and written by Damon Lindelof and Nick Cuse.

The Hunt begins in theatres on September 27th.