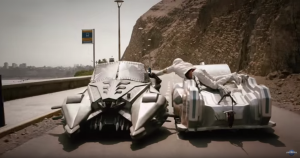 Man, Roger Corman just never stops. Unperturbed by the tepid reception received by recent reboot Death Race 2050 (which he produced), the legendary, Oscar-winning ‘King of the Bs’ has announced his plans to get back behind the wheel for one last hurrah for the franchise, started by 1975’s Death Race 2000. Not only that, but the 91-year-old also has another project in the works.

Talking to Indiewire recently, Corman revealed that he is currently working on Death Race to the Finish, which will be the final Death Race film with his name on.

“It’s been my feeling that you don’t want to push a franchise too far,” he told the site. “You have to know when to stop. [This title] fits the storyline I’m working on. It says, ‘We’ve had a good run. It’s time to move on.’”

Corman – who picked up the well-deserved ‘Master of Horror’ award at this past weekend’s Overlook Film Festival – also talked about another current project, entitled Death Squad, which, the site tells us, takes place in “a post-apocalyptic world in which a tyrannical ruler orders extrajudicial killings supposedly to alleviate crime, which leads him to start killing anyone who disagrees with him.” The film takes loose inspiration from the Philippine President Rodrigo Duterte, as Corman explains:

“It’s the most interesting story that I’m working on. [The main character is a] quasi-dictator, but not that bad a guy – he’s shaded little bit toward the black than shades of gray. He comes to the same conclusion [as Duterte], that the judicial system is corrupt, and he’s going to kill the criminals because he knows who they are. As he gets into it, he finds there’s an opposition to what he’s doing and he starts to say, ‘Well, that guy is against me. I think he’s a criminal. Let’s kill him.’ He starts saying he’s going to kill the criminals and ends up saying I’m going to kill anybody who resists me, but in his mind, it’s the same rationale… he’s expanding his interpretation of what a killer is.”

So there you go, two upcoming projects from the living legend Roger Corman who, I’m pretty sure, has at least another decade of work left in him.