Rock On! With this Poster for The Devil’s Candy 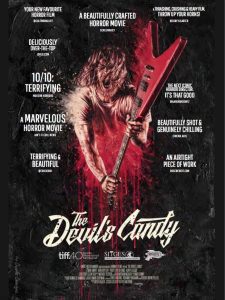 ussie director Sean Byrne is FINALLY back with a new film and it’s called The Devil’s Candy. Byrne is the director behind 2009’s brilliant, terrifying and darkly comic The Loved Ones, which is one of my favourite revenge thrillers. It’s quite simply Carrie meets The Texas Chainsaw Massacre and it’s brilliant.

In The Devil’s Candy Byrne is sticking to the horror genre, but venturing into the supernatural as the film follows a painter that is possessed by satanic forces when he and his family movie into a new home.

The film stars Kiara Glasco (Hemlock Grove, Warehouse 12, Bitten), Ethan Embry (Late Phases) and Shiri Appleby (The Meddler, Code Black, UnREAL). Check out the rocking poster for the film below and be sure to catch The Devil’s Candy when it is screens at the Melbourne International Film Festival on 10th August. If you’re in Australia that is.