They have been called by many names: hobos, tramps, vagrants, and most recently, crust punks. Whatever you prefer, they can be seen all across the American landscape, riding the rails in hopes of adventure or to just simply disappear (and yes, hopping trains is still a thing.) But it’s not just their escapades of travel and exploration like some sort of modern Vikings that had set the hearts of dreamers and poets on fire, but the stories they bring back. Tales of deceit and trickery and the Devil and its Ol’ Scratch himself that coming to get Jackson after all these years. Rock Candy Mountain, Image Comics latest addition to their growing creator-owned titles, brings American folklore to life in a way that hasn’t been seen since Eric Powell’s The Goon. A tasty little slice of Americana, this comic reminds one that there is always a price when crossing the Devil and he intends to collect.

Speaking of the Devil, the comic opens up on Lucifer going full ape on a group of tramps while stylish dressed in pinstripe suit and bowler hat. He’s on a one demon hunt for a hobo named Jackson, but no one seems to know where he is. Luckily for us, we do, and it’s on a train headed as far away from him as he can. Jackson soon meets a new comer to the hobo game, nicknamed Hollywood Slim, and departs some much needed wisdom to the man with the worst luck in the world. But it seems his bad luck is contagious when a group of hobos hop the rails themselves and wind up sharing a cart with Jackson and pal and it looks like Jackson and they have a lot of history together and none of it good. What exactly did Jackson do to get on the wrong side of hobo law and how is the Devil tied in? Why is he so obsessed with finding the fictional Rock Candy Mountain? Well sir, he’s either crazy or stupid, but sometimes, that’s what you need when you’re trying to survive.

The first issue of Rock Candy Mountain raises a lot more questions than answers. We are plopped right in the middle of a story about a man running from the Devil and the poor idiot who got stuck at his side. There’s not much going on in terms of explanation, but if you’re into action first, talk later type of deal, this is up your alley. It takes a lot of skill to develop a plot from a middle point and do a reverse time line and this reporter has seen a lot of works become frustrating because of a poorly balanced past/present plot. Of course, it’s hard to determine what may come when only the first issue has been released and so far, the no explanation trick is working in its favor. Granted, it also helps that there is a newcomer, a sort of stand in for the reader, who happens to be just as lost as the reader themselves, giving us an anchor in an otherwise busy comic. 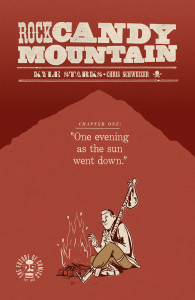 The comic itself is pretty fun though. It does a wonderful job of recreating a post WW2 ambience through its heavy, small press style and smooth, Southern inspired speech pattern. The colors are presented in a flat, monotone style very similar to early ink work and it simply adds to the charm of the comic. If you have read the creator, Kyle Starks, other works, you’ll notice that while he keeps his trademark art style, it doesn’t have the over-the-top humor of Sexcastle, instead choosing to set well placed quips when appropriate. Example: “He’s got punch diarrhea and their faces are the toilet bowl.”

Classic. It’s like if Mark Twain took to comics.

Pick up this classic of hobo folklore anywhere comic are sold!