With Twentieth Century Fox now moving ahead with their long-promised reboot of John Carpenter’s 1981 dystopian classic Escape From New York, word is that Robert Rodriguez is now attached to direct.

While it’s good to know the project is in such capable hands, fans can also be reassured by the news that Carpenter will be onboard as executive producer, and reportedly be closely overseeing the production. The film is to act as both a fresh take on the story and a prequel of sorts, taking a similar approach to Fox’s new Planet of the Apes films, with a plan to launch a franchise in the same way. Neal Cross, who created much-loved BBC crime drama Luther, beat several other writers to the job of penning the script, a first draft of which he reportedly delivered in October. 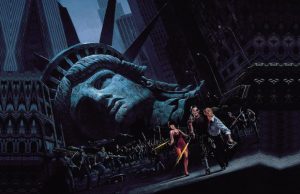 We learnt a lot about the key narrative differences to the original back in December. They include a change in the main villain, from the Duke of New York to Thomas Newton, the playboy heir to a biotech company, and that New York will not be a walled-in, maximum security prison but a stunning, supposed utopia whose citizens are kept in check by a female AI character called April, whose security system is not as sturdy as it should be. Potentially the most contentious change is that Snake Plissken (played in Carpenter’s original by Kurt Russell) has been given a ‘real’ name (Colonel Robert ‘Snake’ Plissken), and will not be sporting his trademark eyepatch.

No news yet on when shooting is expected to begin, but with Rodriguez’s genre credentials, Carpenter’s involvement and an apparently epic new take on the story, this could be one reboot that fans will gladly welcome.