Robert England and Sid Haig will Lend Their Voices to Abruptio 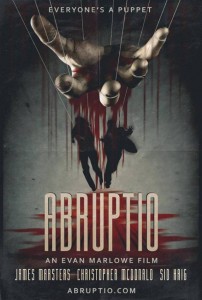 Hellbent Pictures are currently working on a horror film where the actors are played entirely by human-sized puppets that are controlled by puppeteers. How crazy does that sound? Add Robert Englund, Sid Haig and a host of actors to the mix, and there’s a pretty faultless horror film cast right there.

Synopsis:
Abruptio is a twisted tale about Les Hackel (James Marsters), who discovers that a sinister race of beings is manipulating mankind in order to cause chaos. He must uncover their plan before the explosive they’ve implanted in his neck detonates.

Englund will be playing a neurotic accountant with OCD called Mr Salk, who is forced in to dragging people in to meat grinders. It sounds like a mix of Frailty and Sweeney Todd, and we love it. Evan Marlowe (Blood Rush, Horror House) is directing Abruptio, which also features the voices of James Marsters, Rich Fulcher, Kerry Finlayson and Christopher Mc Donald.

Principal photography is set to begin in 2016, so look out for a release date soon.