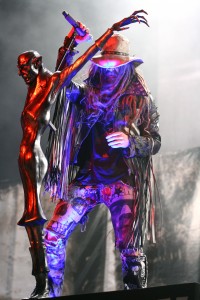 The wait is nearly over. The theatrical release date for Rob Zombie’s horror film 31 has finally been set for September 16, 2016. The release delay was caused in part by a late, but necessary, switch to an alternate film distributor. 31’s North American distribution rights will be handled by Saban Films. Zombie says it’s all sorted now and things are moving ahead. The distributor is currently working on a new trailer.

31 follows the story of five unfortunate friends who are kidnapped and held hostage in a place called Murder World the day before Halloween. They are then forced to play a twisted game called 31 in which they must survive a gang of demented clowns on the loose.

Another cause for the holdup was the Motion Picture Association of America, which handles film ratings. Originally the MPAA wanted an NC-17 rating for 31 due to its “sadistic graphic violence, bizarre sexuality/nudity, pervasive disturbing images, and some strong language,” (they say it like it’s a bad thing) but Zombie made some changes to get the “R” rating to ensure a wider distribution.

While we wait for its release, check out FrightFind.com’s review of 31, which was penned by one of their intrepid reviewers who caught the midnight premiere of the film at the Sundance Dance Film Festival in January 2016. You can also view a video of Zombie talking about the film’s inspiration as well as the original film trailer.

Zombie insists the edits and R rating haven’t lessened the impact of the film at all. We’re inclined to believe him. No doubt there will be plenty of screams and gut-wrenching moments to satisfy fans. Besides, as Zombie wrote on his Facebook page, the full-length “Zombie Cut” version will eventually be released on DVD so we can see everything he intended.