After the deranged carnival of Rob Zombie’s 2003 feature debut House of 1000 Corpses, the metal icon-turned-director changed visual tack for spinoff/sequel The Devil’s Rejects, making a super violent crime spree flick that looked like a sun-baked Western. He even won over some mainstream critics in the process. Most critics and even a large number of fans feel he lost his way somewhat as a filmmaker in the years since however (they’re wrong, but that’s a rant for another time), so the news of his latest project may go down very well indeed.

Having hinted before about resurrecting the psychotic Firefly family, Zombie has now confirmed that he is working on a follow-up of sorts to The Devil’s Rejects. With Captain Spaulding (Sid Haig), Otis (Bill Moseley) and Baby (Sheri Moon Zombie) having perished in a hail of gunfire to Lynyrd Skynyrd’s Freebird on their last outing, it is not known how Zombie plans to bring them back, but presumably either by way of a prequel or some kind of spinoff. 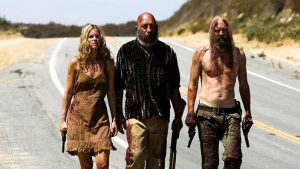 We have no news yet on what stage the project is at, and when shooting may begin, but you better believe we’ll be keeping you posted once we do.