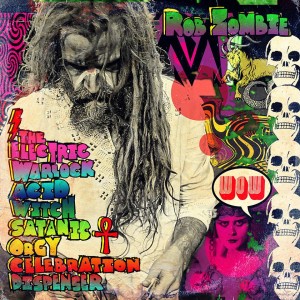 Here’s what the horror metal master has to say about his latest musical opus: “I can easily say this is my favourite album yet… no joke. Yeah I know every fucking asshole says that. But it is seriously our heaviest most fucked up musical monster to date. One song entitled ‘Well, Everybody’s Fucking In a U.F.O.’ is sure to be an instant Zombie classic! Not since Hellbilly Deluxe have I spent this long putting an album together. It was worth it.”

Were this news not exciting enough, Zombie is working hard on adapting the album into a film, which fans will have the opportunity to appear in. Available to pre-order at Pledge Music, the album can be purchased in a variety of different merch packages, including one priced at £350/$500, which includes for the buyer a role in the film.

As the website explains: “RZ is shooting a new film and is inviting just 200 of the most hardcore fans to get involved. You could be playing anything from a horrible monster to a sick robot or maybe just playing your crazy self… that is if you’ve got what it takes. Time to show us your star potential…”

The Electric Warlock… song titles include Satanic Cyanide! The Killer Rocks On!, A Hearse Overturns With The Coffin Bursting Open and The Hideous Exhibitions Of A Dedicated Gore Whore. Below is the quite frankly awesome trailer for the album.