Rob Lowe to Investigate the Supernatural in The Lowe Files

Now, this news is pretty epic. Rob Lowe (You, Me and the Apocalypse, Monster Trucks) and his sons are embarking on a supernaturally-inspired journey in a new show called The Lowe Files. The trio will travel around the USA to investigate spooky legends, hoping to use science to explain some of the weird goings-on. 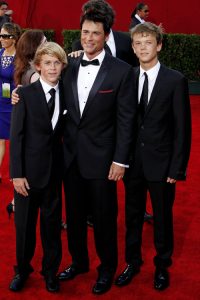 The Lowe Files is being described as an “unscripted version of The X-Files”, which sounds like the greatest thing ever. The idea of Rob Lowe walking around dark, haunted buildings like a true Ghost Hunter is going to be something. Whether that something is a “good” something is yet to be seen.

Does anyone believe any of the incidents that occur on these supposed “ghost hunting” shows or is it all just a load of old tosh? I, for one, hope the Lowes can prove the existence or aliens, ghosts and demons, so all us doubters can be proved wrong.

9 episodes of The Lowe Files have been ordered from A&E and they should be airing this summer.