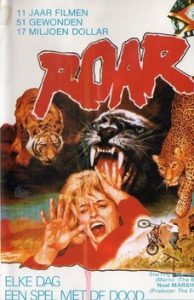 Synopsis:
An American family travel to Africa to visit husband/father, Hank: an animal rights activist who migrated into the wild. Upon arrival, wife/mother Madeleine and the three children get trapped in Hack’s dilapidated shack and targeted by a pride of carnivorous cats.

Writer/director and star Noel Marshall’s directorial debut infamously featured African tigers, lions, cougars and cheetahs roaming freely amongst the cast and crew. This resulted in regular on-set animal attacks and the cast/crew receiving life threatening injuries, many of which were captured on camera and controversially included in the film. Despite Roar boldly billing itself as “An exciting adventure movie for everyone!” on its European cinema debut, Marshall’s film still remains unreleased in many regions. When finally debuting in the USA on 17 April 2015, a new poster and tagline were created, which read: “No animals were harmed in the making of this film. 70 cast and crew members were. The most dangerous movie ever made roars into theatres this spring”.

With this in mind, it’s fascinating to see how a film’s marketing can evolve with the passing of time. Even the real-life content of Roar seemed suppressed in the 80s advertising to make the film look more like the family adventure it aspired to be. Roar was apparently encouraged by the financial success of Born Free in 1966, but in 2015, advertisers capitalised on the controversial production as though only just realising what a lucrative commodity its context could be and re-marketed Roar as a horror for its re- release. The new series of black and white posters featured a close up image of a growling lion or bloody face, behind its title in blood red lettering, possibly assuming that, for gore-hounds, fake thrills and violence might not be enough, and they would relish the chance to watch authentic big cat/man mauling on the silver screen.

Roar is more of an intoxicating horror than its creators and original marketers may have initially realised. It’s a skull shudderingly tense, nerve shredding suspense thriller (and wildlife movie) unlike any other and is gradually growing into a cult phenomenon. Even though the story and characters are fictional, all of the interaction with the animals is real, as well as the on-screen attacks, which makes for a totally unforgettable viewing experience. Reputable actors, including real life mother and daughter Tippi Hedren and Melanie Griffith received several serious injuries and narrowly avoided death by risking their lives for our viewing pleasure. While cheetahs, lions, tigers, cougars and leopards roamed freely around them, randomly lashing out, slashing left, right and centre like a department store at Christmas.

The first question which sprung to mind while watching Roar for the first time was: how on earth did a film like this ever get made, especially with such highly regarded actors and crew? Closely followed by: what the hell were they thinking?  Roar resounds like the kind of exploitation/ b-movie that simply shouldn’t exist or a twisted amalgamation of The Lion King, Jaws and Cannibal Holocaust. Hedren, a “staunch supporter of animal rights”, came up with the concept while filming Satan’s Harvest in Africa in the 1960s. Hedren’s husband, Noel Marshall, then developed the concept into a screenplay but failed to secure sufficient financing. Marshall made a bit of a name for himself after Exec-Producing The Exorcist and Hedren was an established star but the couple had to resort to selling personal assets to get their dream project financed. They re-mortgaged a ranch and sold their home in Beverley Hills until production finally roared into life with a budget of $17 million.

Despite the scandalous on-screen antics, it was what occurred behind the cameras which was considered more controversial. Melanie Griffith received fifty stitches in her face and plastic surgery after being horrifically clawed and almost blinded by a lion. Cinematographer (and future Speed director) Jan De Bont was scalped after a lion bit into his head. De Bont received 120 stitches. Noel Marshall was attacked so many times he developed gangrene. It took him years to recover from all the wounds. Hedren was hurled off an elephant and fractured her leg (this made the cut). She also later needed 38 stitches when a cheetah gummed her skull. Assistant Director Doron Kauper had his throat gnawed open and his ear almost ripped off. These were just a handful of the many incidents in which the cast and crew came under attack, even though they spent most of the time in cages to protect themselves (unlike the animals). But was all the suffering worth it? Is Roar actually any good?

The film starts as a chipper, pseudo political, almost Disneyesque aboriginal flick (the Massai tribe feature in the set up) with pop/ folk songs over a cheery opening credits sequence combining lush, sun soaked landscapes with wild animal footage. Even the film’s main (hired) animal stars are credited: Gary (a lion) as “Robbie’s son Gary”. But Roar swiftly turns much darker than Disney (and that’s saying something).

We first meet Hank strolling freely amongst the lions, chatting merrily to a colleague about a local government committee scheming to slaughter the big cats. Both seem blasé about the fact that they are circled by man-eating beasts which regularly invade scenes/dialogue exchanges with spontaneous attacks, but Noel Marshall takes it all in his stride. A few scenes later and Hank is walking about with no trousers on while his colleague swigs from a bottle of Jack Daniels in a barn. Unsurprisingly, Hank is swiftly lacerated by a lion. He collapses to the floor clutching his leg and screams in agony but then carries on acting as though nothing ever happened (what a pro). 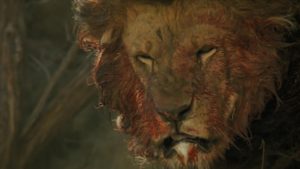 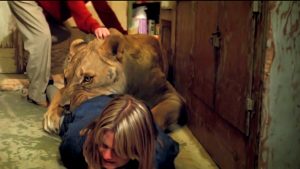 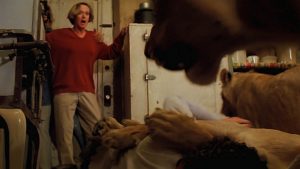 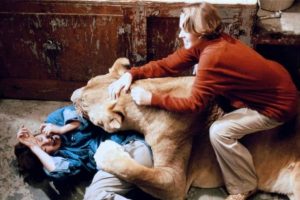 The terror intensifies upon the arrival of Madeleine (Tippi Hedren), her daughter Melanie (Melanie Griffith) and two sons John and Jerry, played by Noel’s real life kids John and Jerry Marshall. The four then become trapped in Hank’s cabin and preyed on by the encroaching animals. A petrifying sequence sees the family run screaming and scurrying for their lives into whatever cupboard, wardrobe or crevice they can find to dodge the swishing claws, snarling jowls and slobbering cat chops.

The rest of Roar is a steadily intensifying fight for survival in which reality and fantasy bleed into one as the actors (and the characters they play) try to elude the monsters. A scene featuring Tippi desperately attempting to pull her daughter from under a lion is massively unsettling. You can tell the fear on Tippi’s face is genuine. A river chase sequence is equally enthralling as is another in which one of Hank’s sons hides in a barrel, holding his breath under water while lions lap at the top of it. But despite all of the aforementioned pros, Roar has more than a fair few faux pas, most of which derive from the phenomenally wooden supporting performances (except in scenes when the actors are running for their lives). The dialogue is mostly hammy or perfunctory, serving little purpose other than bridging the suspense/animal scenes. Hedren nonchalantly saying: “look what the cat dragged in” when a lion with his mane caked in blood enters the cabin would be hilarious if it wasn’t so distressing. 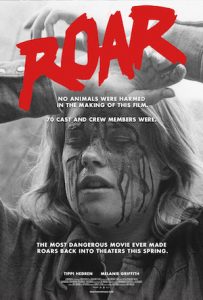 Roar’s inappropriately upbeat tone and score by Terrence Minogue is also often jarring and unintentionally amusing. The mischievous comedy kids film style music mixed with aboriginal drumming and pseudo political/ hippy folk pop massively discombobulates and hinders the horror but makes the experience of watching it all the more weirder. Roar’s cinematic equivalent today could be considered as something more along the lines of Werner Herzog’ s Grizzly Man. If Marshall had crafted Roar as more of a horror instead of the “adventure movie” it was initially conceived as, it might have been too overwhelmingly frightening. As it stands it is terrifying enough to warrant a watch for horror fans, with the added bonus of being a true and inimitable one of a kind.