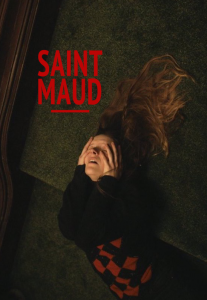 Following a string of critically acclaimed features that earned her recognition as Screen International’s “Star of Tomorrow” and The Guardian’s “breakout star” of 2019’s BFI London Film Festival, it came as little surprise to see Morfydd Clark amongst the nominees for the BAFTA EE Rising Star Award.

Unquestionably one of Britain’s most promising young actresses, Clark is currently hard at work in New Zealand filming the first season of Amazon’s The Lord of the Rings but, in the meanwhile, it’s her breath-taking performance in indie horror hit, Rose Glass’ buzzy ‘Saint Maud’ that’s got everyone talking.

Drawing on classic horror influences to dissect a fascinating Venn diagram crossover between mental health and religion, ‘Saint Maud’ sees Clark play a young country nurse who deliberately cocoons herself in a pious relationship with God. As her grip on reality begins to falter, Maud’s care turns into a deadly mission to save her latest patient’s soul, by any means necessary.

In the light of Clark’s BAFTA nomination, SCREAM magazine sat down with the the thriving thesp to reflect on her whirlwind rise in recognition, addressing universal themes of health, religion, loneliness and social alienation and how she can’t wait to dip her toes back into the intimacy of theatre and smaller film productions after wrapping on the “Lord of the Rings”…

And don’t forget! You can vote for the BAFTA EE Rising Star Award winner here.